“You have to kind of just wing it.”

That’s the advice you might not expect from two successful entrepreneurs, but the advice that works. The first nationally branded instant papaya sauce, Ninja foods has humble beginnings, much like the women who created it.

So, Alex thought – why not. She had some free time, and one night assumed the role of papaya sauce chemist. After her experiment was complete, she called to La, who was upstairs, to come taste it. That night, they tasted papaya sauce recipes until their stomachs hurt. But the consensus was clear – this is actually pretty good.

The recipe for instant papaya sauce was brewing long before those nights in the kitchen.

Both women were born in the same area of Vientiane, Laos. Even then, they never met. They both lived in the same refugee camp when La was six years old and Alex was one year old – and they never met. La’s mother pushed around a rice cart in Laos – Alex’s mom bought the rice from that cart.

“We came from lines of merchants,” joked Alex. But in Laos, they never met.

After coming to the United States, both attended the University of Arkansas, but still didn’t meet until La joined Alex’s indoor soccer team in 2011. That long time coming soccer meeting, which would make anyone say, “finally!” got the ball rolling on the project that would change both of their lives.

Instant papaya sauce, though, wasn’t an instant success. Those beginning stages in the kitchen is when the women really took the philosophy of “just winging it” to heart, and began to research how to turn the sauce into a marketable product. Alex hopped on the phone with the health department and got most of her questions answered. Then, they went for it. 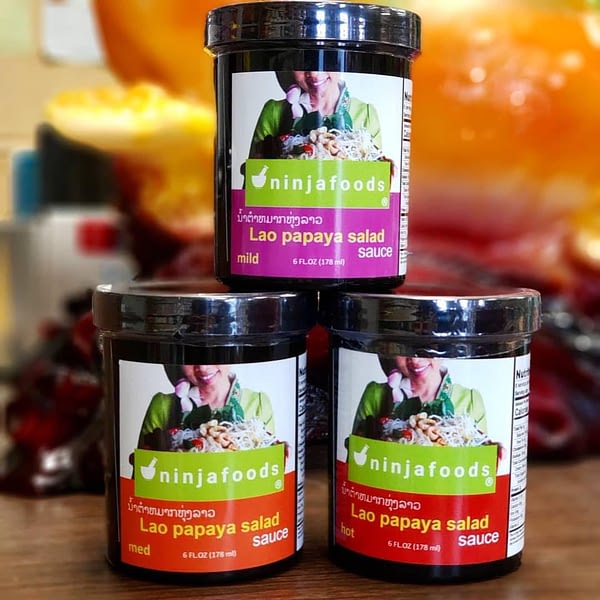 Before the pair even launched their product, they were getting the word out. They literally met up with people in parking lots and handed over the sauce for them to try, joking about how it felt like they were doing something illegal. They were literally hustling on the streets, selling Ninja Foods out of their trunk.

Their next strategy was to hit up local stores around town, and speak with the manager. Sometimes, they’d drive up to six hours away to pitch to a grocery store. They simply showed up, introduced the manager to their product, and said if it didn’t sell, they’d buy it back.

But they never did end up having to buy it back. Using this grassroots method, Ninja Foods was stocked in 40 stores. And the product kept selling. During an event in Chicago, the two remember giving a sample to a grocery store manager who asked them to make their sauce on the fly. They had planned to simply leave their product with the manager, but instead, were asked to do a demo right then and there. Every employee in the store tasted the sauce, and, much like the consensus made back in Alex and La’s kitchen, they agreed – this is good. The manager asked for three cases of Ninja foods. Those cases sold out within a week.

From when it launched in 2015, it took Alex just a year to be able to transition into full-time work with Ninja Foods. Year after year, the business has grown exponentially. La still has a full-time job as a Wal-Mart supplier working as a Category Advisor, but still tackles marketing efforts like it’s a full-time job of its own – which it is.

“For me, personally, word of mouth is the best way,” La explains of the marketing tactics she prefers.

“I think it’s being genuine and actually loving what we do. [People] get excited when we talk about the product and see us eating it,” Alex adds.

And it would be hard not to get excited about the sauce – or anything, really – where Alex and La are involved. The couple make for a vivacious pair that you’d not only want with you at your party (and, thanks to Ninja Foods, not in the kitchen), but you know can tackle anything they’re faced with head on. In fact, this unbreakable spirit is how Ninja Foods earned its name in the first place.

At an old job, La’s boss was not one to frequently give words of praise. However, he took note of La’s work – it was always precise, always fast, and she would always over-deliver. He nicknamed her ninja, and one day even printed out a picture of a ninja and gave it to her. She was so touched by this rare compliment that she cried.

It only seemed to make sense, then, that an instant papaya sauce crafted by La and her partner would be called Ninja Foods. They wanted their recipe to be fast, precise, and the same quality you can expect, every single time.

“With us, it’s really genuine, because it comes from the heart,” says Alex, thinking back to the early days in their kitchen when the first fifty jars of Ninja Foods literally took eight hours to make.

“I feel like even though it’s more mass-produced now, it’s still made from the heart. It’s not grandma’s, but it’s very, very close. We don’t want to replace grandma,” adds La.

The two are living examples that if there’s no heart in a product, then there’s no reason to sell it.

“If you’re chasing other people’s dreams, every time you have an obstacle that comes up you’re just going to find reasons to quit. But if you’re doing it for reasons within, that are keeping you up at night, you’re not going to give up. You’re going to find every possible way just to make it happen. I think that’s why [Ninja Foods] is still going,” La says.

That idea is echoed throughout the story of their product. “I would say if you really want to do it, just get up, go out there, and do it,” says Alex.

So, what’s next for these two Southeast Asian entrepreneurs? Don’t say you heard it here, but it’s rumored that a new product is dropping soon. And, like Alex says, it’s inevitable that they’ll follow their own sound advice – wing it, just go for it, and “do it good, do it well.”