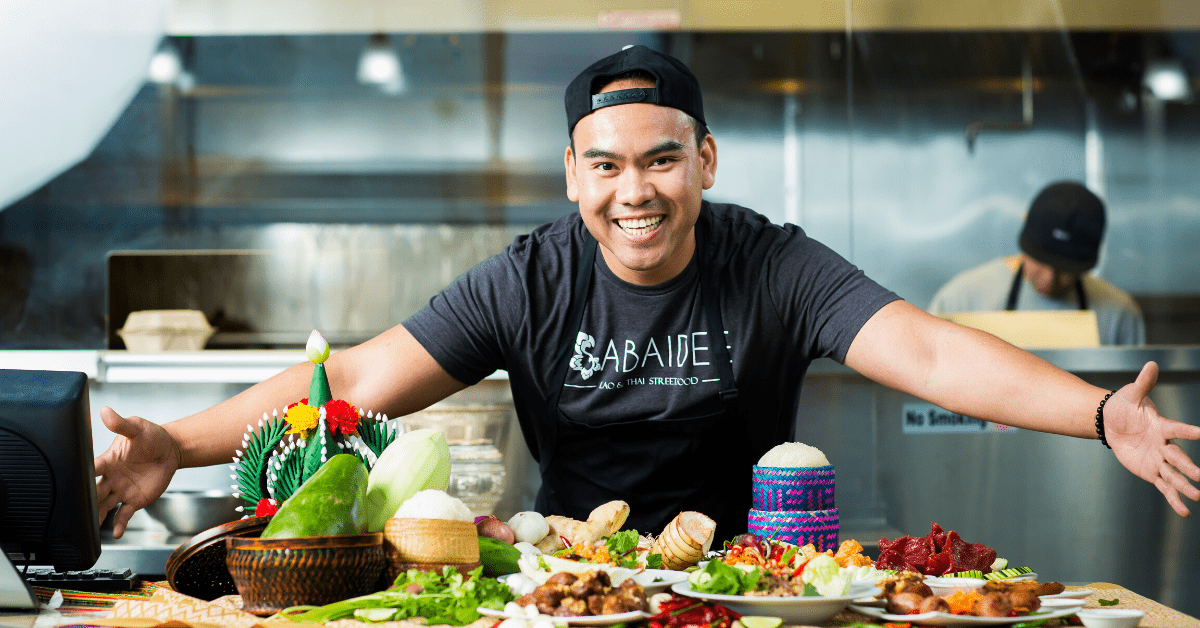 You come to a completely foreign country right when you’re going into high school. You don’t really know your ABC’s. No one is speaking your language. What do you do? Build your own company before you’re in your 20s and later open a wave of new restaurants? Probably not.

That’s what Boi Singharaj did.

Singharaj’s owns three restaurants, all named Sabaidee. “Sabaidee” is actually a combination of two different Laotian phrases. “Sabai” means to be happy, or relaxed. “Dee” means good. Put them together and you get Sabaidee, a warm greeting or a wish for happiness. But that’s not quite where the journey started.

In Laos, Singharaj’s parents divorced when he was three years old, and he moved with his mother to the East Coast at the age of fifteen, to attend Westerly High School in Rhode Island, trying to make a better life for themselves. To add to the culture shock of moving from Laos to the smallest state in America, he was one of only a small handful of Asian Americans in his entire high school. But even then, they still didn’t speak the same language. His fellow classmates spoke Chinese and could communicate with each other, while Singharaj, on the other hand, could speak to no one. Still, he reminisces that he was lucky to have moved there, amongst a small beach town with kind people.

Displaying a resourcefulness that would go on to characterize his entire career, Singharaj knew he still had one way to connect with others: soccer. In Laos, he played soccer his whole life, and was able to walk onto the varsity team in high school in his freshman year.

“Even though I didn’t speak any English to them, they still respected me because of my performance. This kid doesn’t talk to nobody, he just works his ass off,” says Singharaj.

By the time he graduated high school, Singharaj was working at a casino in Connecticut while attending community college, where he was planning on pursuing a degree in web design. Then, his mother got a job offer for a supervisor position in Tampa, Florida.

Already well-liked at the casino, it was time for him to make a choice. It didn’t take Singharaj long to realize: if he decided to work full time as a dealer, he’d actually be making twice as much money than he would make after he completed his degree as a web designer. This was the start of something: he remained at the casino, while his mom accepted the position and moved to Florida, earning more money for him and the family.

“In a small town, you live in a bubble. Everybody else is doing the same thing. So if you are different or you think outside the box, that means you are not cool or you just think too big.” That’s fine, but don’t judge me because I think bigger than that. Like, I want this I want that, because I know – why can’t I do it? Why are there people on TV that can do it, and why can’t we? What’s the difference between us and them?”

Cue the hustle. By the age of nineteen, not only was Singharaj one of the most popular dealers at the casino, he was also running his own promotion company for a local night club, working Monday through Friday as a marketer. Not enough? He decided to become a DJ, so he wouldn’t have to pay the DJ at the nightclub.

History repeated itself: he soon discovered that he would make more money with his own business and as a DJ than he was making at the casino.

“I would be dealing blackjack and my mind would be somewhere else. I don’t belong here,” he explained.

But there was one roadblock: benefits. Working at the casino meant getting a 401k and health benefits, while his own business didn’t offer that safety net. So he waited, biding his time. Soon, after promotion upon promotion, the casino had to lay him off. They could no longer afford to pay his salary, but he got an unemployment package.

Just what he wanted. Soon after, he decided to visit his uncle, who lives in Dallas. That would be a life-changing trip.

An entrepreneur himself, Singharaj’s uncle was particularly gifted in spotting potential. Another relative happened to be selling a restaurant at the time of Singharaj’s visit, and offered to sell it to him. His uncle offered to mentor him through the process. With the same energy he threw at his other ventures, Singharaj jumped on the opportunity.

“This guy believes in me. Why would I not do it?” he said.

He flew back to Rhode Island for three days, packed up everything he owned, and came back to Dallas. His foray into the restaurant industry had begun.

At first, it was not a walk in the park.

“I put in everything I had. Every penny, every single dime I have.”

Business was slow. He had to drive 45 minutes each way to get to the restaurant. His supply orders weren’t large enough to meet the minimum requirements for delivery, so he had to go to the store every morning to stock his shop. His chefs didn’t trust him yet. For about ten months, after paying the bills, he could not afford to pay himself. It was a sharp turn from his life in Rhode Island.

About a year into the business, Singharaj’s grandfather in Laos passed away, and he returned to Laos for three weeks. That’s where he reached a turning point. Everywhere he went, there was street food. Unique, popular, and most importantly, delicious, he knew – this was what he needed to bring back to his restaurant.

That year in 2016, he returned to Dallas with a fire in his belly. And Sabaidee was born.

New name, new food, new menu, new remodel. The day he rebranded, the numbers began to increase. Then they slowly increased some more. Then, boom, on the headline of a newspaper – “First Lao restaurant in Dallas.”

In just two months, Sabaidee began turning a profit. Soon, his gourmet but fast-casual concept was a staple of the community, with write-ups not only in the local Dallas Observer, but top-level publications like Bon Appétit. Not long after, he duplicated the success into two other Sabaidee locations.

“Don’t worry what other people think about what you’re doing, just focus on your own lane, that’s it. When you’re looking at other people’s lanes, you’re just wasting time. Focus 100% on what you want to do and be a master of that. My story is, it doesn’t matter what you know. If you want to do it, just go for it and just make it happen. If you can see yourself there, why would you want to quit now? There’s no excuses,” says Singharaj.

Not knowing the language? No excuse. No friends, no money – no excuse. Singharaj built his businesses from the ground up, and is using some of his success to give his mother the life he knew she deserves, taking her along for the ride during his travels as a way of saying thank you. “At the end of the day, without her, I would still be in Laos maybe in jail or dead. It’s my time to take care of her now.”

Three popular locations and several sister locations later, Singharaj is not stopping there. What else has he got cooking? Even more Sabaidees, across the country.

“I want to be Panda Express.”

If you don’t live near Dallas, don’t worry. No matter the odds, there’s one thing you can know for sure: if it’s up to Singharaj’s unshakable entrepreneurship, a Sabaidee is going to be coming to a location near you.