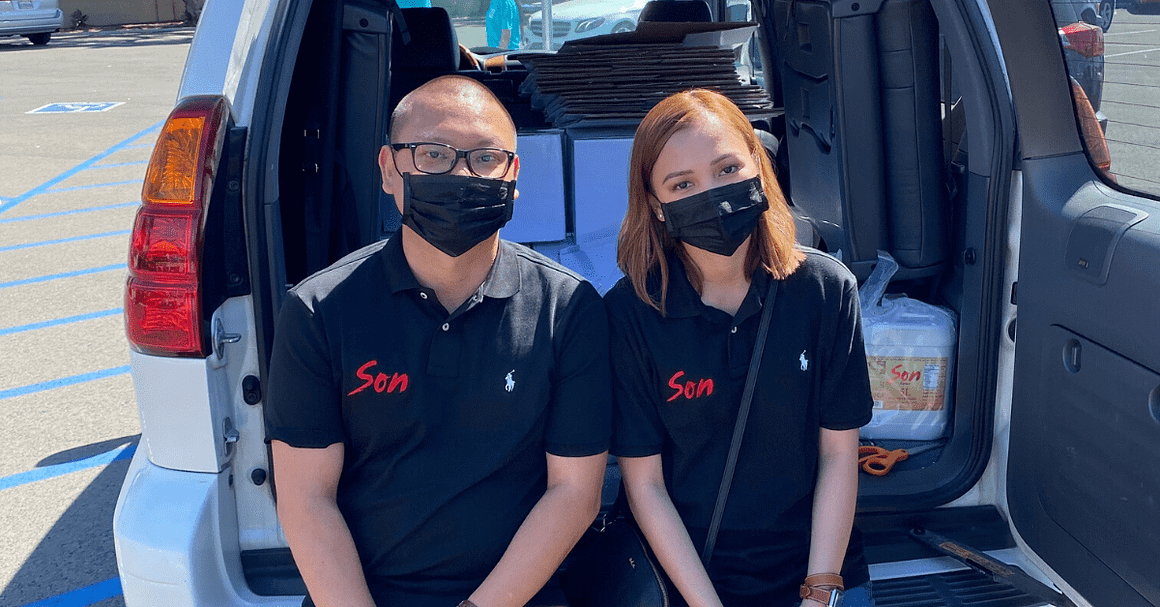 What do you say when you’ve built a multi restaurant chain from the ground up in Vietnam, and have launched an artisanal fish sauce brand into grocery stores across America?

That’s what you say if you’re co-owner of Son Fish Sauce Danny Tran, anyway. No, Tran and his wife have a three-step vision for their business, and they’ve only just completed step one.

Tran moved from Vietnam to the United States with his grandfather and parents when he was eight years old. They settled down in Orange County, and he eventually went to Cal Poly Pomona for engineering, later switching to Cal State Fullerton. But it turned out, he never finished. “I got the travel bug,” he says. He told his parents he was going to go to Saigon for three months. That trip ended up turning into three years, a time where he would meet Albee, his future wife, and begin to venture into the food business.

While living in Vietnam, Tran had a craving for Boiling Crab. Since cajun food wasn’t available in Saigon, Tran asked his friends who were going back to Vietnam from the states to bring him spices. From there, a craving turned into a crazy idea. He experimented with making seafood every day, which led to a feast of at least a few kilos of seafood for dinner every night. Long story short, Tran and his friend from University of California Irvine partnered together and opened The Cajun Cua, the first ones to do cajun in Vietnam – if not all of Asia in 2011/2012.

“When you live abroad, you always have to find new ways to make money. You can’t really rely on a corporate job. That’s kind of the story of how I got into the food business – out of necessity.”

Definitely no longer relying on a corporate job, Tran was then running two successful viet-cajun restaurants, that is now 3 and turning in 4 thanks to his partner…also husband & wife duo. It wasn’t long before another crazy – or genius – idea took hold.

A year into opening his restaurants, Tran was reading a magazine article. In the article, top chefs from around the world were asked what their secret ingredient was. The common answer? Fish sauce.

It was at that point that Tran turned to his wife and asked, “Hey, doesn’t your family make fish sauce?”

The answer was a nonchalant “yes.” And not only did Albee Tran’s family make fish sauce, it turned out they had been producing fish sauce for over four generations on the small island of Son Rai. What he saw in the generational family business, Danny wanted to bring to the rest of the world. In 2015, with a blessing from Albee’s father, Tran sold his stake in The Cajun Cua and moved back to California to launch Son Fish Sauce.

“We didn’t get any handouts from the family. There was no silver spoon, so to speak,” Tran emphasized. The fish sauce that had been produced on Son Rai island for 70 years was the product that Tran was selling, but everything else was completely up to them. They started from scratch, and built their own brand and pushed it themselves.

“We had to learn everything from the ground up. We had to learn how to import, export, warehousing. After we figured that out we had to figure out distribution margins, retail margins. It was all trial and error,” explains Tran. “It’s very tough to break into that industry, especially when you’re young. You really have to prove yourself to them.”

From cold-calling top chefs to going into grocery stores themselves and handing out samples, it was Danny and Albee’s job to build their brand from the ground up, and strategically produce their marketing and advertising. At first, it was slow going. Speaking to consumers who have been using brands they’re already familiar with, and winning them over to a new fish sauce doesn’t happen overnight. There were ups and downs, and the company almost went bankrupt several times. Their efforts felt like they weren’t being received. But then, something happened: it started to work.

“I think that with any product, at the end of the day, it’s what we learned in high school or in college – you can have the best mouse trap in the world but if nobody knows about it, you’re not going to sell one.”

It eventually became hard to ignore the product that the Trans were offering. Most fish sauce on the shelves of the grocery store is just a powder and water, with other processed, chemical ingredients. Son Fish Sauce, on the other hand, is simply anchovy and sea salt that’s been aged for a year. Tran takes a strong stance on this issue – “Why are you poisoning people for profits?”

Soon, Son Fish Sauce began to crop up in restaurants worldwide, becoming the secret ingredient in both Michelin, James Beard, and Sauvor awarded restaurants as well as local mom and pop locations. The Slanted Door in San Francisco, Haisous in Chicago, Chom Chom in Hong Kong, and Le Feu in Aspendale, Australia, are just a few locations cooking dishes with the Tran’s all-star sauce.

Because it’s all natural, the product is more flavorful – a little goes a long way. That’s something that a great chef knows that they can’t miss out on. And it’s something that Tran doesn’t want you to miss out on, either. “It makes me really happy to see that westerners are opening up to fish sauce…I love sharing about fish sauce because it’s appealing to everybody as a salt substitute umami bomb, they just don’t know it yet. That’s the Cajun Cua mantra.”

Always trying to promote sustainability, profitability, and charity, Tran pushes on to spread the world to new and old generations alike. So, what about that three step plan that Tran has for the business?

Number one: “Show the Vietnamese population and the rest of the world that Vietnam does have a high quality and premium product.” Son Fish Sauce is sending a message to the world: there are high quality products out there from Vietnam. You just have to demand for them.

Number two: “Introduce other products from Vietnam that are high quality to the American, Western markets.” Tran plans to launch a coop program where he will share profits with farmers in Vietnam, importing new products to America to share with demographics that may never have had the opportunity to try the food before.

Number three: In the same way that when a shopper looks at the rooster on a bottle of Sriracha and knows exactly what they’re getting, Tran wants to become a household name in order to pave the way for others. He wants people in South East Asia and Vietnam to know that if they have a high-quality product, they should sell to their own people first in their country and abroad, and then branch out.

As he explains the heart of his business, an overarching theme emerges. Tran doesn’t just care about the quality of his product. He also cares deeply about the products that other people with a similar background are producing, and he doesn’t want anyone to sell themselves short just because they think they have to.

“I’m a firm believer when you do a test, your first instinct is always the right answer, and I also believe that the same goes in business,” says Tran. “Whatever light bulb goes on inside your head that got you to start the business, don’t lose sight of that. It’s very easy, because people will move you and change you and circumstances will do that. Stick with that core idea and keep going, whatever it takes. Not everybody hits it at the same time.”

Next time you’re sitting down to dinner, you might just know the secret: determination, entrepreneurship, and a little bit of fish sauce.