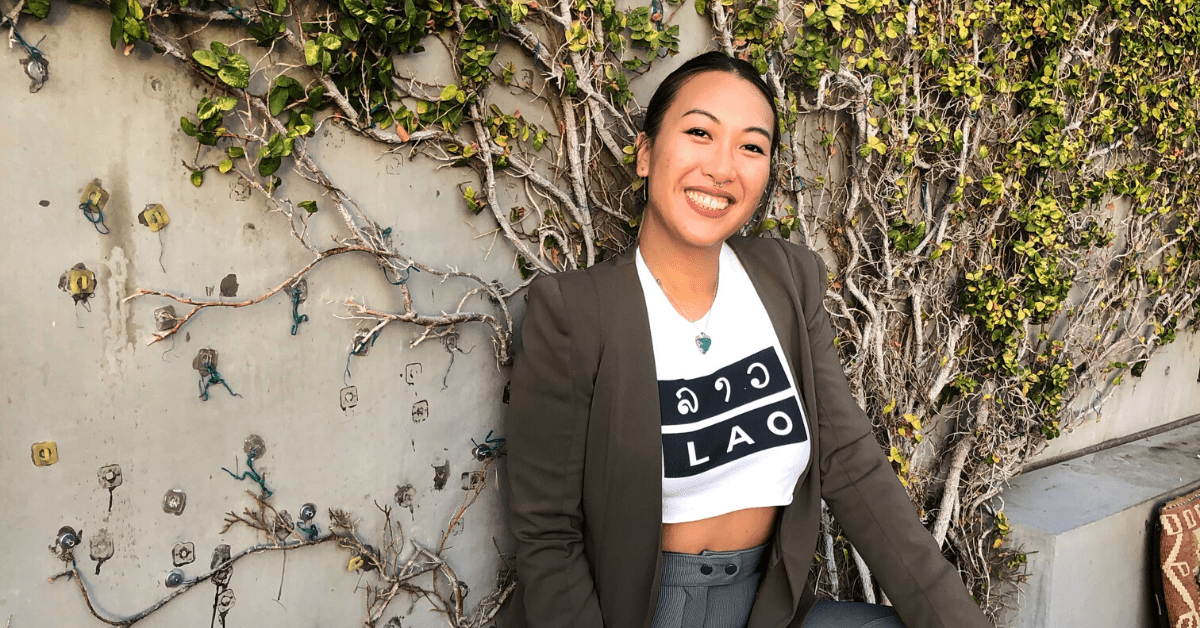 Usually, Rita Phetmixay is usually on the other side: she’s the one asking the questions, digging deep, and allowing a space for healing through the telling of personal journeys. But she, too, has a story to tell.

Creator of her own podcast, Healing Out Lao’d, Phetmixay has carved out a space in the digital realm and beyond for the Lao diaspora to discuss their experiences. A full-steam ahead, unstoppable personality, even the prospect of being able to tell her own story through bits and pieces on her podcast charges her with excitement.

“Healing out Lao’d came to me as a form of retribution, a forum of reclamation, a forum, really, of taking back my life after I felt that I had been in lost in experiences of trauma and violence growing up as a child of refugees, particularly a child of parents from Laos and Thailand from the rural South,” Phetmixay says.

The daughter of Lao Isaan refugees from Laos and Thailand, Phetmixay grew up in North Carolina in a community where minorities were few and far between. She recalls being the only Southeast Asian family within a fifteen-mile radius, with “sprinkles of Lao people here and there.” It was a difference that she saw compounded by structural racism.

“There’s just so much that happens growing up that you don’t know about. And having your parents not understanding what you’re going through. It can make you feel like – what in the world am I going through? Am I supposed to exist?” She says this with a good-natured laugh, underlying a steely strength of someone who’s had the opportunity to process through their emotions, remembering a time when she was first discovering the narrative of trauma that surrounds the Lao community. “I always felt that I was on a search for my Lao space,” she says.

Throughout her life in North Carolina, she explains that there was a lack of resources for people of color in general. It was black and white, and her only source of history was from her dad telling her the stories of him growing up and escaping the war. It wasn’t until she moved to Los Angeles that things began to change.

During her undergraduate studies at UCLA, she was able to connect with others and start a conversation about race issues. Together, they were able to share similar experiences of overcoming race and racism. For the first time, she was beginning to realize: she wasn’t the only one who went through this.

Phetmixay went on to get her dual masters’ degrees at UCLA in Asian American studies and social welfare. During that time, she decided it was time to turn her father’s oral history lessons into something special. With no experience in filmmaking, she heard about an opportunity to learn how to make documentaries in an Ethno Communications class. From there, she created Phetmixay Means Fighter, a twelve-minute documentary that follows her father while he details his story of escaping from Laos. The film was met with success, and was shown across several festivals, including the Sacramento Asian Pacific American Film Festival. But the film, of course, meant much more than the support of critics.

“I numbed a lot of my feeling when I was in undergrad, when I was in K-12, because I didn’t know how else to process my feelings. There’s just no space to do that,” she explains. But through the creation of her film, and joining up with a group of Lao Americans named “Laos Angeles,” the dialogue was starting to shift. She was noticing that there was a common theme of healing, and growth amongst her Laotian peers. That they had a shared experience of resilience that allowed them to rise to where they were today.

Turning her father’s story into film had a restorative effect on Phetmixay. “I was rebirthed – it was a transformation, like I came back from the dead or something. I felt revived,” she says. “It all landed so perfectly together.”

During these experiences, an idea was stirring in her. It had always been there, but she needed time, healing of her own, and confidence to solidify it: she wanted her “community to see that can revive themselves from levels of atrocity that they have encountered.” But how?

Drawing inspiration from her big sister, Kulap, who was the co-host of another podcast, Phetmixay started to explore the podcast scene. Already following the Healing Justice podcast, she began to realize that an online forum of conversation could be the perfect space for dialogue about Lao stories. Still, it took her a year to launch her project. Phetmixay spent 2018 knowing what she wanted to do, but still waiting.

After that year of readying herself, Phetmixay decided it was time. A mentor gently reminded her – you’ve been supporting people for so long. Don’t you think it’s time for people to support you?

So she quit her job working at UCLA, and that was it. “I was afraid that if something was to happen with this project, it would be a direct reflection of who I was as a person. You cannot let that mentality pin you down. Now I encourage failure. Just don’t fail the same way. Fail differently.”

At first, Phetmixay didn’t let many people know she had quit her job to pursue her podcast – not even her parents. Even then, she was met with some skepticism amongst a majority of support. It was not an easy decision, but she knew: she felt the energy of conviction telling her it was time to leave. She realized that UCLA had given her everything she needed, and “was a soft cushion to feel a lot of safety before I ventured out into the real world. It was just something that was very comfortable. But I realized – am I ever going to grow when I’m in comfort?”

Looking back, Phetmixay says with confidence that it was the best decision she could have made. She started honing in on Lao diaspora storytelling, interviewing other members of the Lao community who had a story to tell. Before long, she was getting feedback she never expected. People in New Zealand, Canada, France, and across the world were tuning in, when she only thought she had the potential to reach a Lao American audience. She hadn’t yet discovered the potential she was tapping into. The desire for Southeast Asian stories to have a place to be told was fierce, affirming, and life-giving.

“When you create that, and you build on that platform, you can’t go back.”

Now in her second season with over 100 episodes of her podcast, Phetmixay knows she is still growing, but thinks about how much healing has already taken place.

“When we mourn, that’s the first sign of healing. It’s being able to acknowledge that something tragic happened in our past. We can finally acknowledge that, and take full accountability of what happened, but rise above the occasion and see that we’re not a victim of our past. And that wound can be tucked away. That wound can just be a scar. It doesn’t have to be something that’s still throbbing or still fresh.”

For anyone who wants to follow in her footsteps and create a podcast, Phetmixay has some choice words of advice. She attributes a big portion of the success of her work to networking. “You can’t enter into any projects without the people that help carry you there.” Build your network and build your relationships. With that in mind, though, she hammers another point home.

“You have yourself at the end of the day. That’s the biggest thing I would give to anyone who’s trying to start a new project, is trusting yourself beyond anyone else. You are the only one that you have to come home to. You are the only one who you have to sit with your thoughts, your feelings, your emotions, and you know yourself. If you know yourself enough to trust yourself, you can do it.”

As Phetmixay continues on her healing journey, her hope is she can guide other people along the way. So with her own grit and determination, her network, and a little bit of failing differently, she’ll continue to heal out Lao’d.